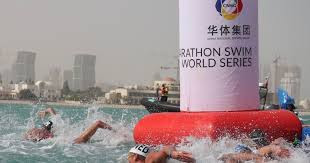 Marc-Antoine Olivier (FRA) and Ana Marcela Cunha (BRA) celebrated their first victory of the season on Saturday March 13, in Doha (QAT), at the first leg of the FINA/CNSG Marathon Swim World Series 2021 .

Olivier, 24, termed his victory in the season-opening race important: “It was a difficult race because of high waves and I am so happy to win here again. I started slowly and picked pace [in the last three laps], as I followed the last year’s plan in which I was successful,” he said.

“This first meet was so important because it is an Olympic year and my win here is crucial,” Olivier added.

Cunha emerged victorious in the women's race in a photo finish (2h01m30s3), while the second and third steps of the podium were taken by France's Oceane Cassignol (2h01m30s8) and Germany's Lea Boy (2h01m31s9).

Brazilian star Cunha was elated with her close victory in Doha that marked the return of Marathon Series after over a year: “The level of the race in presence of athletes who are preparing for the Olympics was very tough. There was a lot of wind but I like swimming in these conditions. These conditions make the race tougher for every contender,” Cunha said.

The Qatar Swimming Association, which will host the Doha 2023 FINA World Championships, organised the event by adhering to all COVID-19 protocols advised by the Ministry of Public Health (MoPH), and also to the specific FINA guidelines for open water swimming.

The 2021 calendar of the FINA Marathon Swim World Series unfolds as follows:

You can re-watch the races on FINAtv and a detailed news report is available on FINA website . Photos and videos are on FINA social media.