Could Putin Launch Another Invasion? 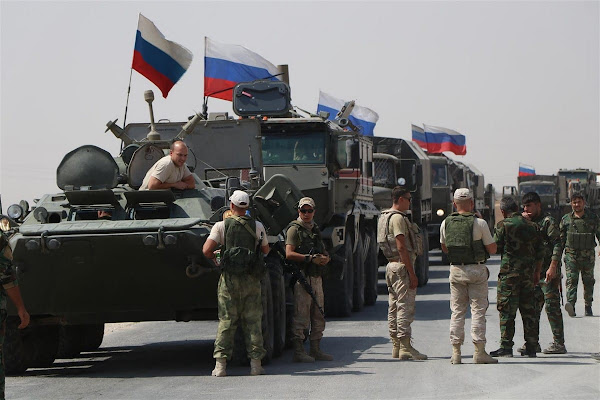 Russian military vehicles seen on the road towards its military outposts in Kamisli in Kamisli, Syria on 14 September 2020 [Samer Uveyd / Anadolu Agency]
Politico: Could Putin Launch Another Invasion?
The same factors that led up to his incursion into Ukraine are in place again, including domestic protests, a struggling economy and a desire for glory.
A trained KGB agent, Vladimir Putin knows how to hide his feelings, but in 2013, after former President Barack Obama described him looking like “the bored kid in the back of the classroom,” Putin let it be known that he was furious. And rightly so: kids in the back of the room are rarely ambitious. Putin, from day one of his rule 21 years ago, has had big, ambitious plans for himself and for Russia.
A far greater Soviet patriot than a Russian one, one of his first priorities when he became president in 2000 was to recover state ownership or control of the key political and economic assets lost in the Soviet Union’s demise: major industries, courts, media, national politics. Then, in his third and fourth presidencies, he turned his ambition to geopolitics: to incursions into Ukraine and Crimea, an alliance with Syria, and various assaults on Western democracies with what the KGB used to call “active measures” recast as cyberattacks.
Read more ….
WNU Editor: Putin could easily launch another invasion. The proper question to ask is …. would he?
I do not see that happening. The Kremlin's focus is on the pandemic and the economy.
But it is true that the conflict and war is escalating in Ukraine (expect a blog post on that tomorrow). And if there is a place that Putin would set his eyes on to get involved, it will be on that conflict.Original Article