Why Is Saudi Arabia Not Hitting Back At Iran? 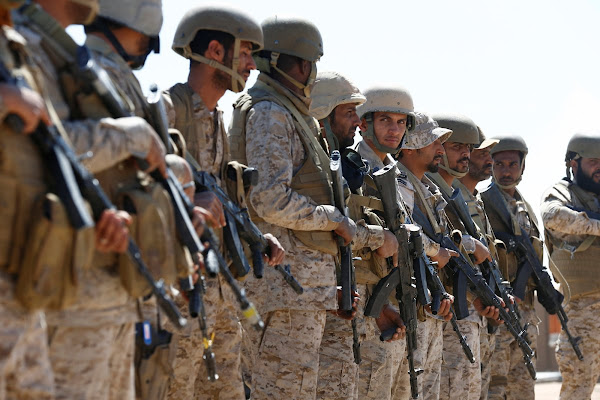 Saudi soldiers stand in line at an airfield where Saudi military cargo planes land to deliver aid in Marib, Yemen January 26, 2018. Picture taken January 26, 2018. REUTERS/Faisal Al Nasser
Kourosh Ziabari, Asia Times: Why Saudi Arabia won’t hit back at Iran
Attack on Saudi oilfields had all the hallmarks of an Iranian strike but Riyadh has good cause to keep its powder dry
Tensions are rising again in the Middle East after an explosives-laden drone and ballistic missile fired by the Iran-aligned Houthi rebels in Yemen targeted Saudi Aramco facilities at the Saudi port of Ras Tanura and in the city of Dhahran early on March 7.
The attacks on the world’s largest petroleum company pushed up crude oil prices, now hovering around US$70 a barrel, to levels not seen since 2018.
The spike in prices and potential for tit-for-tat attacks has cast a new cloud over hopes that the global economy is poised to emerge from the damage wrought by the global pandemic.
Read more ….
WNU Editor: Who says Saudi Arabia is not "hitting back". Maybe they are the ones responsible for this and not Israel …. U.S. Intelligence Says Israel Is Targeting Iranian Oil Tankers With Water Mines (March 12, 2021). Or maybe Israel and Saudi Arabia are working together.Original Article