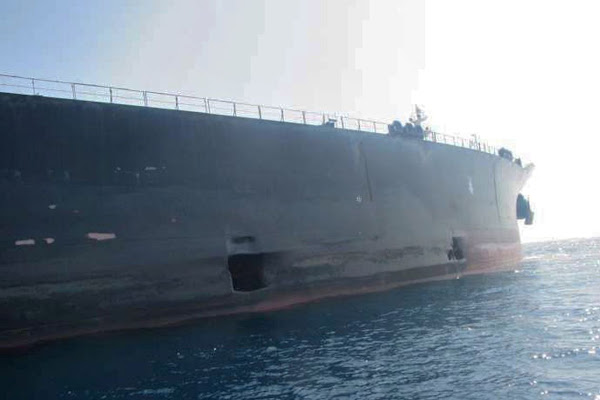 The Iran National Oil Company released this 2019 image showing one of its oil tankers that was purportedly damaged by an explosion in the Red Sea. Photo: National Iranian Oil Tanker Company
Wall Street Journal: Israeli Strikes Target Iranian Oil Bound for Syria
Campaign against ships, using mines, shows an expansion of hostilities in the Mideast
WASHINGTON—Israel has targeted at least a dozen vessels bound for Syria and mostly carrying Iranian oil out of concern that petroleum profits are funding extremism in the Middle East, U.S. and regional officials say, in a new front in the conflict between Israel and Iran.
Since late 2019, Israel has used weaponry including water mines to strike Iranian vessels or those carrying Iranian cargo as they navigate toward Syria in the Red Sea and in other areas of the region.
Iran has continued its oil trade with Syria, shipping millions of barrels and contravening U.S. sanctions against Iran and international sanctions against Syria.
Some of the naval attacks also have targeted Iranian efforts to move other cargo including weaponry through the region, according to U.S. officials.
The attacks on the tankers carrying Iranian oil haven’t been previously disclosed. Iranian officials have reported some of the attacks earlier and have said they suspect Israeli involvement.
Read more ….
WNU Editor: i just have one question. Why did US intelligence (or should I say the White House) decide to leak this Israeli intelligence/military operation against Iran to the Wall Street Journal?
Was this done to gain favor with Iran?
You tell me.
More News On Reports That Says Israel Is Targeting Iranian Oil Tankers With Water Mines
US officials say Israel targeted at least 12 tankers headed for Syria -WSJ — Jerusalem Post
US officials say Israel has hit many ships taking Iran oil, arms to Syria: WSJ — Times of Israel
US Report: Israel Targeted At Least A Dozen Iranian Oil Ships Bound For Syria Since 2019 — i24 News
Israel has struck at least 12 ships carrying Iranian oil to Syria, report says — Haaretz
US Intelligence Reveals Israel Has Bombed "Dozens" Of Iranian Oil Tankers — Zero HedgeOriginal Article