Germany Wants To Tax U.S. Soldiers Who Are Stationed There 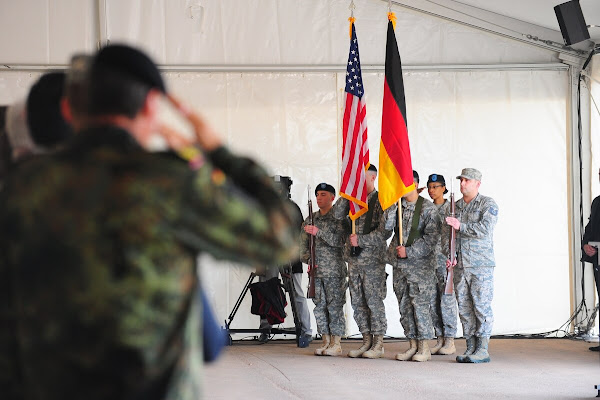 Attendees salute the U.S. and German flags during the groundbreaking ceremony here for the Rhine Ordnance Barracks Medical Center Replacement, Oct. 24, 2014, in Weilerbach, Germany. (Sgt. Daniel Cole/Army)
TaxProf Blog: Germany Seeks To Tax Income Of U.S. Soldiers Stationed There
In an ongoing story, that is certain to be of interest to Americans abroad, Germany has begun treating certain US Military Personnel as tax residents of Germany. In other words, Germany is imposing tax (and apparently penalties) on the income earned by US military personnel stationed in Germany. The starting point is that US Forces in Germany (and other countries) are governed by the SOFA (“Status Of Forces Agreement”) agreement. Among other things, the SOFA agreement exempts US service personnel from being treated as tax residents of the country where they are serving. In simple terms: As long as the individual serviceman meets the conditions in the SOFA agreement, he/she would NOT be treated as a tax resident of Germany.
Read more ….
WNU Editor: On top of the tax threats. The cost of living in Germany is very high.
Hat tip: InstapunditOriginal Article