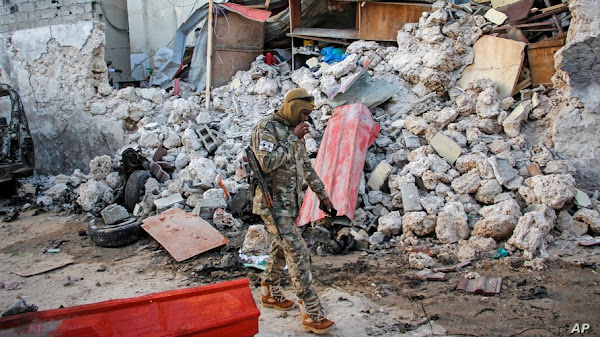 A soldier walks past rubble in the aftermath of an attack on the Afrik Hotel in Mogadishu, Somalia, Feb. 1, 2021. Al-Shabab claimed responsibility for the deadly assault.
VOA: Somalia Fears New US Airstrike Guidance Is Benefiting al-Shabab
A key U.S. partner in the fight against terrorism is growing increasingly uneasy about the Biden administration’s new guidance on the use of drones and airstrikes, concerned that the changes are giving an already emboldened al-Qaida affiliate more room to operate.
Since U.S. President Joe Biden took office January 20, the United States has not launched a single airstrike against al-Shabab in Somalia, after seven strikes were conducted from January 1 to 19.
Senior Somali military officials worry the new guidance, which has imposed tighter controls on ordering airstrikes and requires the White House to sign off on operations, means al-Shabab will begin to gather momentum.
Read more ….
WNU Editor: If al-Shabaab believes the U.S. is disengaging from Somalia by limiting military operations like drone surveillance and strikes, to me it is a given that they will organize and intensify their attacks.Original Article