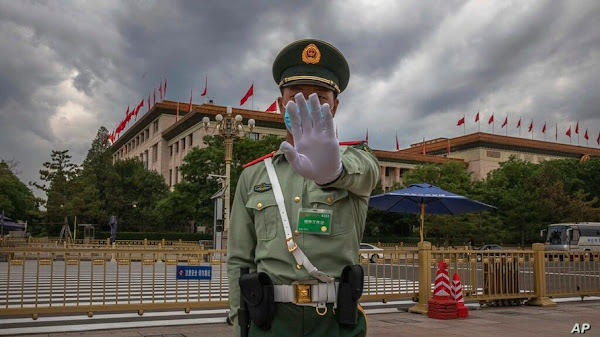 FILE – A Chinese People's Liberation Army soldier gestures to the photographer to stop taking photos in front of the Great Hall of the People, after the second plenary session of China's National People's Congress, in Beijing, May 25, 2020.
VOA: US Warns World Getting 'Taste' of Chinese Domination
Top U.S. officials are warning that countries around the world can no longer hide from the ramifications of an ever more ambitious and aggressive China.
And they say Beijing is growing ever more comfortable flexing its military might farther away from home.
"We have a taste of what it means to be led by China or to be deeply influenced by China," Navy Rear Admiral Michael Studeman, the director for intelligence for U.S. Indo-Pacific Command, told a virtual conference Tuesday.
"You're going to find a very global, expeditionary Chinese military that will be there to step in anywhere they think China's interests are jeopardized," he said. "Anywhere globally, China feels like its development interests are threatened, what you'll find is that they will end up sending out the PLA [People's Liberation Army] more and more often."
Read more ….
WNU Editor: China's neighbors already know what it is like to exist beside China. But I think the world already has a taste of what it is like to do business with China, and most countries are not happy with the arrangement.
As for US Navy Rear Admiral Michael Studeman's warning. He is prepping everyone to prepare for when China becomes militarily involved in other nations. I concur with the admiral's assessment. The world is not ready for that type of Chinese involvement.Original Article