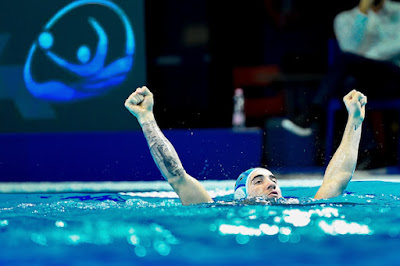 All but one teams playing the second leg at home ‘validated’ the advantage they gained a week ago. Sabadell stunned host Mediterrani by thrashing the fellow Spanish side. Vouliagmeni bested Novi Beograd in the toughest duel by winning a single goal in aggregate.

Novi Beograd could save the first leg to a tie against Vouliagmeni as they climbed back to 7-7 after being 4-7 down at home. A week later in Athens the match was more balanced though the Greeks were always ahead in the first three periods only to see the Serbs take advantage in the fourth twice. However, Croatian Andrija Basic netted the last two of the match to send his team to the best eight.

The other match-up ending in a tie last Saturday between the two Spanish sides took a different path: Sabadell stunned host Mediterrani in the first period by rushing to a 2-6 lead and that did the damage. A week ago Mediterrani led by three early in the third but Sabadell could come back to even at the end – now Sabadell routed their rivals as they were 3-10 up at halftime and won 6-17 at the end, a brilliant feat indeed and they become the only team playing the second leg away (so far) which could advance to the quarters.

The third Spanish club CN Barcelona fought hard in Zagreb, came back from 3-0 to 4-4 but Mladost never let the visitors lead and after a hard-fought twogoal victory last week, the Croats held on for a 7-6 win this time.

Crvena Zvezda won by the same margin against Tourcoing at home. The French tried to cause an upset and jumped to a two-goal lead after falling behind by three at home but the Serbs caught them up soon. The visiting side could lead once more in the fourth at 5-6 but the hosts scored the last two goals in the tough contest which saw 26 exclusions.

In the Russian derby Dynamo Moscow didn’t leave any doubt that they were the better side and beat Sintez by three today after having already kept the away match under firm control.

The two Hungarian clubs had already settled the bill last Saturday to enjoy trouble-free return legs today. Szolnok didn’t care much of the defence this time as they beat Primorac 17-16 – interestingly the Montenegrins earned 5 penalties and buried each –, while OSC offered the same dominating performance against Pays d’Aix while hitting the 20-goal barrier once more.

The eighth match wasn’t played since the home side Team Strasbourg breached the LEN Covid-19 protocol seriously – the LEN TWPC officials will evaluate the case on Sunday and take their decision.

According to information published by U.S. Navy on April 20, 2021, the Italian Navy flagship, …