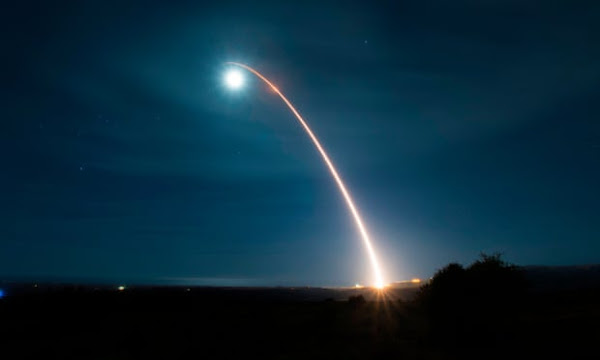 The GBSD nuclear missile would replace the Minuteman III, pictured, but questions have been raised about its viability in the event of a conflict with Russia. Photograph: Clayton Wear/US Air Force
The Guardian: 'Cold war-era weapon': $100bn US plan to build new nuclear missile sparks concern
Scientists say the GBSD project is outdated and the result of lobbying rather than a clear sense of what it will achieve
The US is building a new $100bn nuclear missile based on a set of flawed and outdated assumptions, a new report by the Federation of American Scientists (FAS) will say.
The report, due to be published next week, will argue the planned ground-based strategic deterrent (GBSD) is being driven by intense industry lobbying and politicians from states that will benefit most from it economically, rather than a clear assessment of the purpose of the new intercontinental ballistic missile (ICBM).
Read more ….
WNU Editor: Developing and maintaining a nuclear force is never a cheap affair. This $100bn budget for a new ICBM is probably going to be surpassed within a year or two. But even with this high cost, this missile is still going to be built for the simple reason that this is how things are done in Washington.
The FAS report is here …. ICBM Information Project (Federation of American Scientists)Original Article