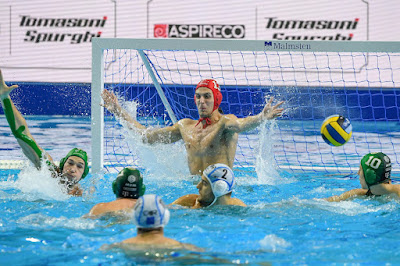 Just like Recco in Group A, fellow Italian side Brescia also bagged four wins in as many matches in Budapest as they defended brilliantly and kept titleholder Ferencvaros on 6 goals on the closing day. In the hunt for the fourth qualifying spot Hannover took the upper hand over Jadran Herceg Novi – the German side’s Montenegrin stars did the most to claim the crucial victory against the Montenegrin champion. Barceloneta retained its first place after these four days but the top rank will only be decided in April.

The last big match of the week kicked off in style: Brescia took a flying start, two great shots from Maro Jokovic, a ‘sneaking one’ from Vincenzo Renzuto gave them a 3-0 lead in four minutes while they easily handled the home side’s attacks. But the first 6 on 5 for Ferencvaros not only broke the ice but put the title-holders into flying mood, Gergo Zalanki finished off a counter and Nikola Jaksic netted his second after another nicely played man-up for 3- 3 – still inside the first period.

The first 6 on 5 for Ferencvaros ended in a fast ball-loss in the second, then Brescia had some luck to regain the ball in their man-up after a save and Jacopo Alesiani could score from the second attempt to halt their drought at 7:14 minutes. At the other end another man-up was gone, this time with a turnover foul (though the ball hit the net), while Angelos Vlachopoulos’ smart shot from action gave Brescia a 5-3 lead. They had a man-up after a time-out for +3 but Soma Vogel could catch the ball coming from close range but it offered only temporary relief as his mates struggled to create any danger in front, so it was 6-3 soon as Renzuto buried a penalty. While Brescia staged a 3-0 run again, Ferencvaros’ 6 on 5 conversion was 0/3 in this period as Zalanki’s shot flew away so the Magyars were shut out in this quarter and the partial score was almost the same as in last December when the Italians led 5-2 at halftime.

The cross-bar saved the Hungarians from going –4 down in Brescia’s extra and Zalanki blasted the ball to the net from the counter to halt their goalless phase after 9:59 minutes. They could have come closer but wasted two manups with bad shots, though Vogel also stopped one at the other end. With four minutes gone, it became crucial who scored first amidst the exhausting swimming race. With 2:47 to go, Vamos sent the ball home from a penalty for 6-5 but the incoming fresh players put the next man-up together for the Italians in the next possession and Giacomo Cannella reset the two-goal cushion which they held with brilliant defending till the last break.

An extraordinary scene introduced the final quarter – though Brescia got the ball, Marco del Lungo a little bit overplayed his role in keeping the centreforward under the water when the ball was not even close and he was redcarded. Astonishingly, the hosts could not direct the ball onto the goal from this man-up despite Brescia had no goalie for 20sec, the block denied them – and as a sharp contrast Edoardo di Somma’s shot from the perimeter on equal strength found the back of the net for 8-5. Ferencvaros seemed to be messed up its game a bit, their next man-up also gone, then incoming goalie Matteo Gianazza posted a fine save. Brescia’s man-up didn’t work at the other end though it was a match-ball with 4:02 to go and soon Vamos could finally score from their third man-up for 8-6. But Brescia responded well once again, Vlachopoulos’ great shot from action gave them back the three-goal lead in the next possession and that indeed was a winner. Brescia’s defence remained tight leaving the title-holders little or no room in attack: Gianazza faced only three shots, Ferencvaros had only 14 on target in total, while Brescia had 20 (31 altogether) and bagged another three-goal victory, just like in December when they had won 10-7.

Before the last match, which was a crucial encounter in the race for the 4th place, Jadran had suffered a serious blow as they had lost their first-pick goalie Peter Tesanovic due to a positive Covid-19 test. The Montenegrins could never keep the number of conceded goals below 11 (they got 11 in their first four matches and 12 in the last two) and only once could outscore their rivals – in December when they beat Hannover 12-11 (their lonely win here beforehand). Now they faced off again with the Germans but in the first half it was not a question of 21 year-old Darko Durovic’s performance in Jadran’s goal, whether the Montenegrins can keep up with Hannover. Four goals in two periods are not a big deal – but Jadran’s offence lacked the necessary sharpness, they had two fine shots but many more bad ones as they were 1 for 7 in man-ups while Hannover was a bit more effective though didn’t offer any sparkling attacking while taking a 4-2 lead.

This trend continued, Jadran missed another man-up while Hannover, without risking anything in offence but relying on a firm defence, found the right moment for a counter and Darko Brguljan made it 5-2. With some luck Vasilije Radovic netted from close as a ball after a weakened shot dropped in front of him, that halted their bad run after 10:13 minutes. Though man-ups didn’t work at either end, Aleksandar Radovic finely placed actions shots did, he netted two from the same place, right-back, in 50 seconds so it was Hannover’s Montenegrin players who buried the hopes of Herceg Novi in this period (7-3).

Brguljan earned a penalty, converted by Ivan Nagaev, then Radovic blocked the next 6 on 5 of Jadran so the game was practically decided early in the fourth at 8-3. Petar Muslim netted his second soon – he was well rested for this match – while the young Montenegrins struggled to create any danger as they ran out of gas – they were outweighed and outpowered towards the end of this physical battle. After another 11 minutes they could net one at the end from a rare counter – even so, despite they managed to keep the number of goals conceded under 10 for the first time, their offence didn’t click (were 1 for 11 in man-up at the end). At the same time, Hannover pulled off a crucial win, the second one this week which might just as well give them back the F8 spot they may lose if they should hand over the hosting right to another city because of the extremely strict German lockdown measures and their impact on the long term.

The game of Dinamo and Barceloneta was a lop-sided contest as expected. The Spaniards, despite their legendary goalie Dani Lopez got some rest, played a brilliant first half in defence, their Brazilian-born second goalkeeper Joao Coimbra Serra also came up with big saves so Dinamo sill had a zero next to the team’s name on the scoreboard (it stood 7-0). In the third the VAR denied their first goal (netted just after the shot-clock expired), but soon they could break the ice and after 19:40 minutes they scored their first which was followed by five more till the end while Barceloneta stopped at 14.

Thanks to Brescia’s winning efforts, Barceloneta kept its first place after this tournament, and it seems that these two sides’ clash in April might decide the top rank as Ferencvaros’ two 3-goal defeats from the Italians put the Magyar side to a hopeless position in case of a three-way tie – at the same time, it’s worth noting that the top three teams now officially qualified for the Final Eight.

According to information published by the Nigerian Ministry of Defense on 15 April, 2021, the …