zekal3_3 2021-03-10 Videos, World Comments Off on Beijing Accuses Top US Pacific Admiral Of ‘Hyping Up’ A Threat Of A Chinese Invasion Of Taiwan 12 Views 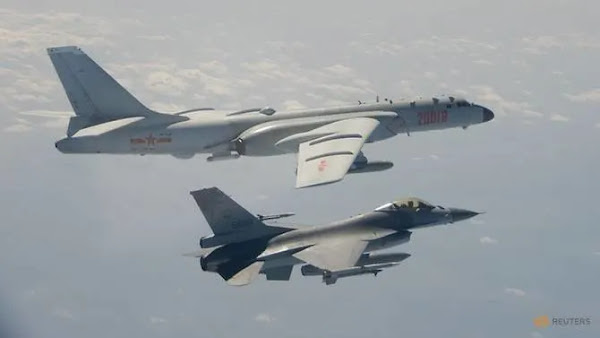 A H-6 bomber of the Chinese People's Liberation Army Air Force flying near a Taiwan F-16 in a Feb 10, 2020 handout photo. (Photo: Reuters)
CNA: China accuses US admiral of 'hyping up' threat of Taiwan invasion
BEIJING: China on Wednesday (Mar 10) accused a top US commander of attempting to "hype up" the threat of an invasion of Taiwan to inflate Washington's defence spend and justify its own military chicanery in Asia.
The US' top military officer in Asia-Pacific, Admiral Philip Davidson, on Tuesday said China could invade Taiwan within the next six years, as Beijing accelerates its moves to supplant American military power in Asia.
Democratic and self-ruled Taiwan lives under constant threat of invasion by authoritarian China, whose leaders view the island as part of their territory and which they have vowed to one day take back.
Read more ….
WNU Editor: The Chinese are responding to this …. Top U.S. Admiral Warns China Could Invade Taiwan In The Next Six Years (March 9, 2021).Original Article