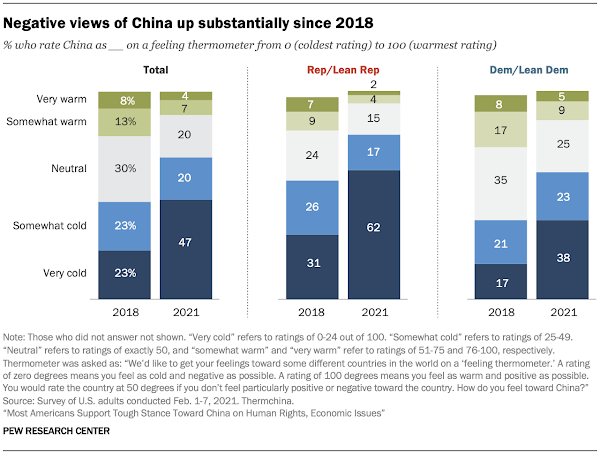 PEW Research: Most Americans Support Tough Stance Toward China on Human Rights, Economic Issues
Fewer have confidence in Biden to handle U.S.-China relationship than other foreign policy issues President Joe Biden has inherited a complicated U.S.-China relationship that includes a trade war, mutually imposed sanctions on high-ranking officials, tensions flaring over human rights issues, Hong Kong and Taiwan, and an American public with deeply negative feelings toward China.
Roughly nine-in-ten U.S. adults (89%) consider China a competitor or enemy, rather than a partner, according to a new Pew Research Center survey.
Read more ….
Update: Pew survey shows hardening American attitudes toward China (AP)
WNU Editor: This is not only an American sentiment. I have noticed in the past year that negative sentiments towards China has increased throughout Asia, Russia (my home country), and Canada (the country that I now live in).Original Article