Is Israel Preparing A Substantial Attack On Iran? 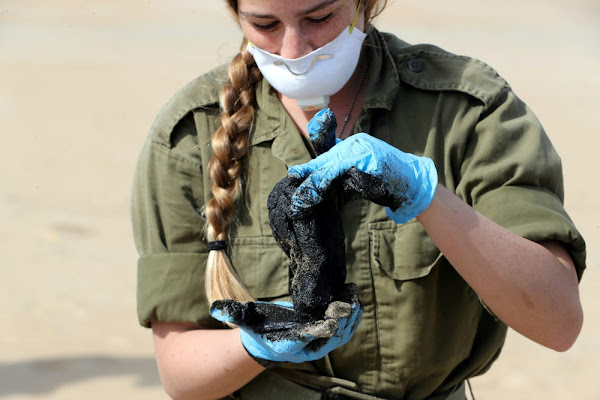 An Israeli soldier holds a clump of tar cleaned from the sand after an offshore oil spill deposited tar along Israel's Mediterranean shoreline, at a beach in Atlit, February 22, 2021. REUTERS/Ronen Zvulun/File Photo
Business Insider: Biden and Europe allies worry Israel is preparing a substantial attack on Iran
* Israel has not yet responded to a suspected Iranian oil spill on its shores in February. * The lack of response could be a sign it is preparing a substantial strike against Iran, sources tell Insider. * Biden and allies in Europe are worried a revenge attack might scuttle nuclear talks with Iran.
Israel suspects Iran intentionally dispatched a ship to dump hundreds of tons of crude oil onto its beaches, the area's worst ecological disaster in decades, in revenge for the November assassination of the country's top nuclear scientist, according to Israeli officials and media.
But Israeli officials tell Insider the statement from the environmental minister directly blaming Iran released Wednesday was premature as the military and intelligence services have yet to make a final determination on both Iranian culpability and the appropriate level of response to what would be the most brazen act of environmental terrorism in recent history.
Read more ….
Previous Post: Did A Libyan-Owned Ship Sailing From Iran Launch An 'Environmental Terror' Attack Against Israel? (March 3, 2021)
WNU Editor: Israel will retaliate. But a substantial attack on Iran itself? I doubt it.Original Article

Previous The Next Major War Will Hit All Americans Online
Next Will President Biden Give A Formal News Conference?