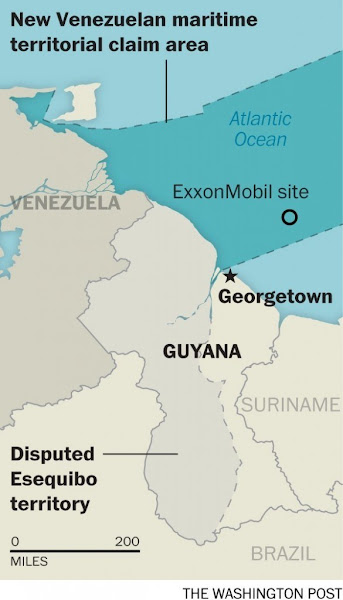 Reuters: Guyana says two Venezuelan fighter jets flew over its airspace
(Reuters) – Guyana said on Wednesday night that two Venezuelan fighter jets entered its airspace, circling a community on the countries’ shared border before returning to their own territory.
The incident is the latest in a long-running border conflict between the two South American nations. Caracas says much of eastern Guyana is its own territory, a claim rejected by Georgetown.
The conflict has flared up in recent years as Guyana has started developing oil reserves near the disputed area.
Read more ….
Update: Venezuela's fighter jets in Guyana's airspace a sign of 'aggression, intimidation' – Foreign Ministry (News Room Guyana)
WNU Editor: Venezuela is claiming three quarters of Guyana. And as the above map illustrates, Venezuela's primarily focused is on oil.
On a personal note. I have friends who work for the government in Guyana, and I have visited the country a few times. I have told my friends in the past that the smart thing for Guyana to do when it comes to Venezuela is to establish a defense pact with a major power in the region (the U.S. or Brazil), This would significantly help to thwart any future Venezuelan plan/threats to use force. But as far as I know, they have not pursued this course of action.Original Article