zekal3_3 2021-03-01 Videos, World Comments Off on Here Are Five Global Hotspots Where Food Prices Are Getting People Worried 13 Views 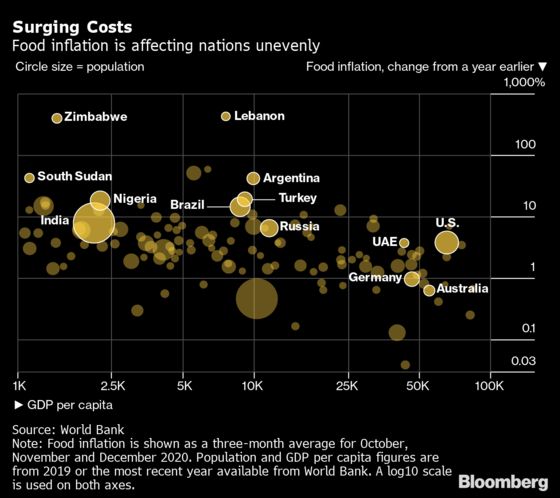 Bloomberg: The Five Hotspots Where Food Prices Are Getting People Worried
(Bloomberg) — The world is racing to vaccinate its way out of the coronavirus pandemic, but another challenge has already emerged for some more vulnerable governments and economies.
Global food prices are at the highest in more than six years, driven by a jump in the cost of everything from soybeans to palm oil because of demand from China, vulnerable supply chains and adverse weather.
Some banks warn the world is heading into a commodities “supercycle.” Inflation is putting another squeeze on consumers hurting from pandemic-induced recession and—in some places—falling currencies.
Since the start of the year, protests have raged in Sudan, while anxieties over securing food contributed to strife in Lebanon and Tunisia, ground zero for the Arab Spring uprisings a decade ago.
In India, farmers revolted against efforts to bring prices down. Russia and Argentina have restricted crop shipments to suppress prices at home. Even rich countries like the United Arab Emirates are considering possible price caps on some foods.
Read more ….
WNU Editor: The five countries that Bloomberg listed are Brazil, Nigeria, Russia, Turkey, and India. In the case of Russia I have been told by family and friends that prices have increased, but it is not a worry now. I live in Canada, and there is no question that prices for my favorite foods have increased significantly.
I would also add a few more countries to Bloomberg's list. China has experienced serious food inflation in the past year. Egypt is another worry. Iran is struggling.
Update: I forgot. The U.S. is also struggling …. Food banks struggling to feed hungry during Covid look forward to Biden's fixes to SNAP program (NBC).Original Article