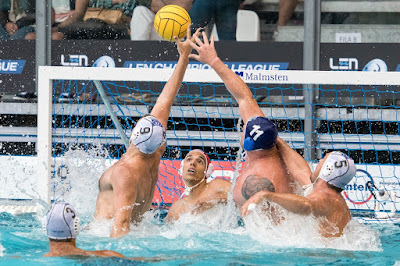 Besides the women’s Euro League quarters, the first leg of the eight-finals in the men’s Euro Cup contributes to the excitements of this LEN Water Polo Super Saturday.

Quite a colourful field came together, featuring many teams which could not make the cut in the Champions League qualifiers and the top Euro Cup entrants. Just like in the women’s quarters, this competition also features na all-Russian derby between Sintez and Dynamo Moscow but also a Spanish duel with Sabadell and Mediterrani (it’s going to be a great show in Sabadell, the men’s game follows the women’s clash of the local team against Olympiacos – too bad that fans cannot attend this spectacle).

It’s also interesting to see the French v Serbian match-ups (Radnicki v Strasbourg and Tourcoing v Zvezda) – the French sides enjoyed a great run in the previous round so they can’t be considered underdogs. At least in these two games, as the third club from France, Pays d’Aix faces one of Hungary’s top sides OSC. The other Magyar club in the field is Szolnok, one of the hottest favourites for the trophy, however, their visit to Kotor may bring some great excitements as no one can take anything granted in Montenegro.

Upcoming Serbian club Novi Beograd can also have a shot at the cup based on their strong performances in the Champions League qualification, now they meet Vouliagmeni, the only Greek team in the race. Croatia also has one club standing, Mladost – being just one game away from making the cut in the Champions League in November – travels to Barcelona and expected to advance from this contest.