U.S. Strategy Paper On China Does Not impress Beijing 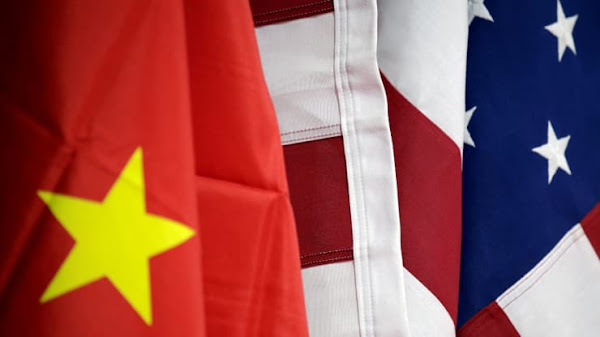 Flags of U.S. and China are displayed at American International Chamber of Commerce (AICC)’s booth during China International Fair for Trade in Services in Beijing, China, May 28, 2019. Jason Lee, Reuters
CNBC: A U.S. strategy paper on China draws a tepid response in Beijing
* “The Longer Telegram” released in late January laid out a detailed proposal for how the new U.S. administration should deal with a rising China under its Communist Party government. * The anonymous author is a “former senior U.S. government official,” according to the D.C.-based think tank Atlantic Council that published the lengthy paper. * So far in Beijing, major Chinese state media have not discussed the paper much, while the foreign ministry said such comments against the ruling Communist Party were “a collection of rumors and conspiracy theories”
BEIJING — A recent U.S. strategy paper on China that’s widely read in Washington, D.C., has drawn only a passing response in Beijing where limited public discussion has focused on one point: The author got China wrong.
“The Longer Telegram” released in late January proposed how the new U.S. administration should deal with a rising China by laying out a detailed critique of the Communist Party government under President Xi Jinping.
An effective U.S. approach on China requires the “same disciplined approach it applied to the defeat of the Soviet Union,” the paper said. “US strategy must remain laser focused on Xi, his inner circle, and the Chinese political context in which they rule.”
Read more ….
WNU Editor: The D.C.-based think tank Atlantic Council's strategy paper on China is here …. Toward a new American China strategy (Atlantic Council). This is a must read for all China watchers.Original Article