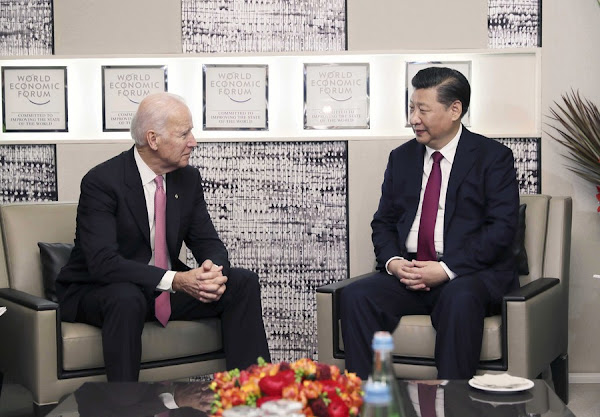 Chinese President Xi Jinping (R) meets with U.S. Vice President Joe Biden in Davos, Switzerland, Jan. 17, 2017. (Xinhua/Lan Hongguang)
Antiwar.com: Biden Administration Rejects China’s Calls for Better Relations
China's foreign minister called for a repair to bilateral relations
In the wake of the Trump administration, US-China relations are at their lowest point in decades. For weeks now, Chinese officials have been calling for better relations, and on Monday, Chinese Foreign Minister Wang Yi continued the call.
“We stand ready to have candid communication with the US side, and engage in dialogues aimed at solving problems,” Wang said. He also called on the US to lift trade restrictions and stop interfering in China’s internal affairs. The US responded sharply to Wang’s remarks.
Read more ….
WNU Editor: In all fairness to the Biden administration's decision to reject China's call for better relations. China had conditions for better relations, and they were/are not realistic …. China's Foreign Minister Calls For Reset In Sino-U.S. Relations By Demanding The U.S. Meets China's Conditions (February 22, 2021).Original Article

Previous Commentaries, Analysis, And Editorials — February 23, 2021
Next Here Is The Case On Why “Life Will Not Return to Normal”