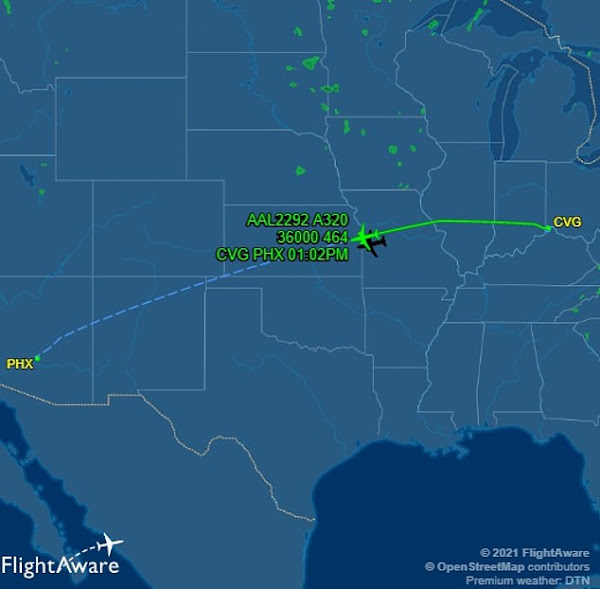 American Airlines Flight 2292's flight path is seen above. The Airbus A320 was making its way from Cincinnati to Phoenix on Sunday
Daily Mail: 'We just had something go right over the top of us': Cockpit audio from American Airlines flight reveals mystifying close encounter with 'fast-moving cylindrical object' over New Mexico at 36,000 feet
* The encounter happened on Sunday as AA Flight 2292 passed over a remote stretch of northeast New Mexico, west of Des Monies, en-route to Phoenix * The flight was travelling at around 460 miles per hour at 36,000 feet * Blogger Steve Douglass said he intercepted a radio transmission from the flight in which the pilot can be heard reporting the encounter to air traffic control * The pilot says the object was a 'long cylindrical object that almost looked like a cruise missile' and had passed over the top of the plane at speed * The flight went on to land safely in Phoenix without any further incidents * The state of New Mexico is no stranger to strange encounters, with the city of Roswell reporting one of the nation’s most infamous UFO sightings in 1947
An American Airlines flight travelling from Cincinnati to Phoenix on Sunday shared a bizarre close encounter with what its pilot described as a fast-moving, ‘long cylindrical object’.
The encounter, which occurred at 36,000 feet above the remote northeast corner of New Mexico, west of Des Moines yesterday, involved AA Flight 2292, an Airbus A320, according to The Drive.
In a radio transmission allegedly intercepted by Steve Douglass, who runs the Deep Black Horizon blog, the pilot can be heard telling Albuquerque Air Traffic Control: ‘Do you have any targets up here? We just had something go right over the top of us.
Read more ….
Update #1: Airliner Encountered Unidentified Fast-Moving Cylindrical Object Over New Mexico (Warzone/The Drive) Update #2: Flight Audio Captures Pilot's Frantic Reaction To "Fast-Moving Cylindrical Object" Over New Mexico (Zero Hedge)
WNU Editor: The object witnessed by AA Flight 2292 is still a mystery.Original Article