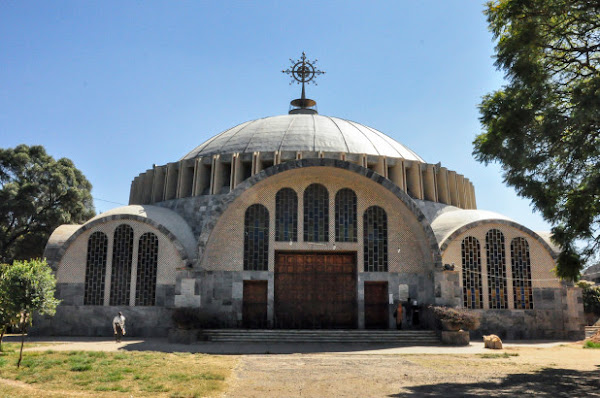 The Church of St. Mary of Zion in Axum, Ethiopia, where the sacred Ark of the Covenant is believed to be housed. AP
NYPost: At least 800 Ethiopians killed after defending ‘Ark of the Covenant’
At least 800 people were reportedly killed in Ethiopia as worshippers and soldiers risked their lives to protect what Christians there say is the sacred Ark of the Covenant from local militia.
Ethiopian Christians claim the Ark — the wooden chest built to hold the Ten Commandments of Moses — is being kept safe in a chapel in the holy northern city of Axum in the Tigray region.
The battle between Ethiopian soldiers and rebel fighters happened in the fall, The Sunday Times reported, but it is only being reported now.
Read more ….
WNU Editor: Reports of this massacre were first reported a month ago, but are only becoming known now …. As many as 750 killed in massacre at Ethiopian church (Aleteia). More here …. Report: 750 Christians Died Defending Church Said To Contain Ark Of The Covenant (Christianity Daily).
The wooden chest is said to be safe. Being kept in a chapel under heavy guard in the holy northern city of Axum in the Tigray region.
More News On Reports That Say That 800 Ethiopian Christians Died Last Fall Defending The Church Said To Be Containing The Ark Of The Covenant
Witnesses Recall Church Massacre in Ethiopia’s Holy City of Axum — Christianity Today/AP Witnesses recall massacre in Ethiopia city claimed to be home to Ark of Covenant — Times of Israel ‘800 people’ killed in massacre at Ethiopia’s Ark of the Covenant — The Independent Report: 800 Ethiopians killed in Tigray battle at church holding ‘Ark of the Covenant’ — i24Original Article

Previous Is The Biden Administration Stumbling Into War?
Next Italian Ambassador To DR Congo Killed In UN Convoy Attack