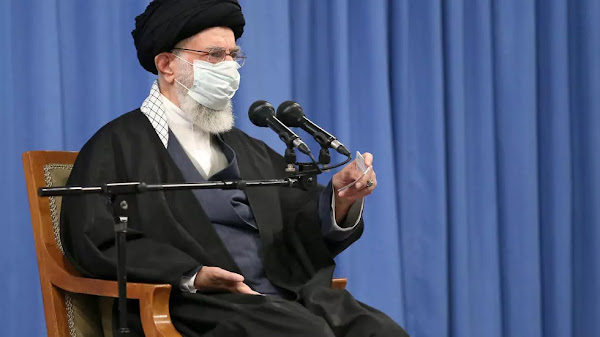 A handout picture provided by the office of Iran's Supreme Leader Ayatollah Ali Khamenei on February 21, 2021 shows him meeting with members of the Iranian Assembly of Experts in the capital Tehran – KHAMENEI.IR/AFP
France 24: Khamenei says Iran could boost uranium enrichment to 60%
Iran's supreme leader Ayatollah Ali Khamenei said Monday that the Islamic republic could boost uranium enrichment to 60 percent if needed, vowing to "not back down on the nuclear issue".
That would be far above the 3.67 percent limit Iran had accepted under the 2015 nuclear deal with world powers, but still short of the around 90 percent required to make an atomic bomb.
Iran has repeatedly denied that it is seeking to build nuclear weapons, a point Khamenei reiterated in the comments that were posted on his official website Monday.
Read more ….
Update: Khamenei says Iran may enrich uranium to 60% purity if needed (Reuters)
WNU Editor: I am not sure about this …. Exclusive: U.S. plays down Iran rhetoric, waits to see if Tehran resumes talks (Reuters). The Iranians are expecting the US to make the first move.Original Article