How Dangerous Are Warzone Burn Pits?

zekal3_3 2 days ago Videos, World Comments Off on How Dangerous Are Warzone Burn Pits? 5 Views 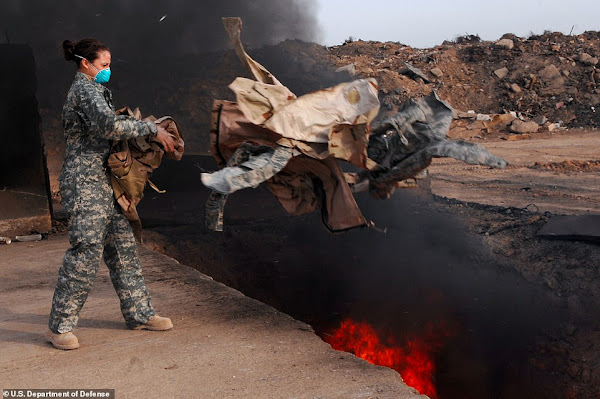 A senior airman tosses unserviceable uniform items into a burn pit on Joint Base Balad in Iraq. Burns pits are areas on military sites overseas that are used to incinerate waste, hazardous material and chemical compounds. During the wars Afghanistan and Iraq, it is thought that as many as 200 bases used open air burn pits to dispose of the vast amount of waste accumulated by the US armed forces
Daily Mail: 'They proudly served their country, but were breathing in toxic air that would kill them': Thousands of dead or dying US veterans were sickened by warzone burn pits – but the VA does NOTHING to help them, claim families
* US soldiers have reported that burn pits were used to incinerate all types of trash, including plastics, batteries, appliances, medicines, munitions, animal corpses and even human waste * During the wars Afghanistan and Iraq, it is thought that more than 200 bases used open air burn pits, and they could burn for 24 hours a day, 365 days a year * One servicewoman described the constant dark black smoke and the lingering smell of burning that seemed to follow you wherever you went on base as 'there was literally no escaping it' * Thousands of veterans believe that toxins generated the burn pits have caused debilitating illnesses that include rare cancers, thyroid disorders, toxic brain injury, pulmonary disease and lymphoma * The Department of Veterans Affairs (VA) does not yet acknowledge a link between the burn pits and long-term health risks and is currently denying the vast majority of benefits claims submitted by veterans * Senator Kirsten Gillibrand told DailyMail.com veterans are going bankrupt trying to pay their healthcare bills and said that the burden should not fall on them to prove their illnesses are connected to the burn pits * Although he has not drawn any concrete links, President Joe Biden has acknowledged that the burn pits could have been a 'significant' factor that drove his son Beau to an early death from terminal brain cancer in 2015 * Advocates hope that President Joe Biden's personal connection means that the new administration will act on the issue and force the VA to provide benefits and compensation
Air Force veteran and mom-of-three Amie Muller was just 36 years old when she was diagnosed with the pancreatic cancer that would take her life nine months later.
Her husband Brian describes that moment as not only devastating for the family but also shocking. Amie was young, otherwise healthy and had no family history of cancer.
'When you start Googling pancreatic cancer there's really nothing good on the internet about it,' he said. 'Being how young she was we just knew that this just didn't add up. The average age for pancreatic cancer is well into the 60s.'
Read more ….
WNU editor: A friend of mine who served in Afghanistan with the French military passed away from lung cancer 5 years ago. He was a non-smoker, and he blamed the burn pit that he was responsible for at his base. He was 35 years old.Original Article