zekal3_3 2021-02-22 Videos, World Comments Off on German Chancellor Macron And French President Merkel Push Back On President Biden’s Remarks That ‘America Is Back’ 30 Views 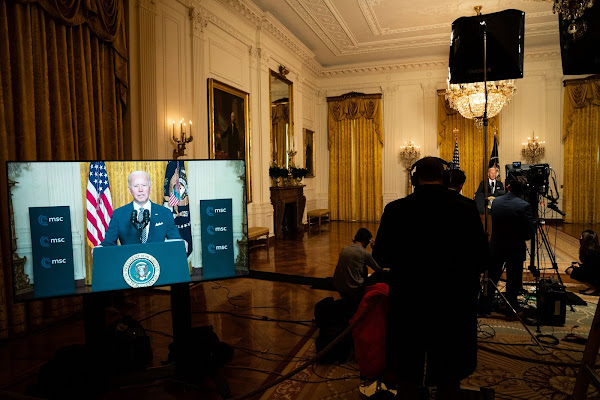 President Biden delivered remarks to a session of the Munich Security Conference on Friday from the East Room of the White House.Credit…Anna Moneymaker for The New York Times
New York Times: Biden Tells Allies ‘America Is Back,’ but Macron and Merkel Push Back
All three leaders seemed to recognize, though, that their first virtual encounter was a moment to celebrate the end of the “America First” era.
President Biden used his first public encounter with America’s European allies to describe a new struggle between the West and the forces of autocracy, declaring that “America is back” while acknowledging that the past four years had taken a toll on its power and influence.
His message stressing the importance of reinvigorating alliances and recommitting to defending Europe was predictably well received at a session of the Munich Security Conference that Mr. Biden addressed from the White House.
But there was also pushback, notably from the French president, Emmanuel Macron, who in his address made an impassioned defense of his concept of “strategic autonomy” from the United States, making the case that Europe can no longer be overly dependent on the United States as it focuses more of its attention on Asia, especially China.
And even Chancellor Angela Merkel of Germany, who is leaving office within the year, tempered her praise for Mr. Biden’s decision to cancel plans for a withdrawal of 12,000 American troops from the country with a warning that “our interests will not always converge.”
It appeared to be a reference to Germany’s ambivalence about confronting China — a major market for its automobiles and other high-end German products — and to the continuing battle with the United States over the construction of the Nord Stream 2 gas pipeline to Russia.
Read more ….
WNU editor: I mentioned it before. In the past Europe would (more or less) follow the U.S. lead on international issues. No more now. President Trump exposed all of this during his Presidency, much to the displeasure of all those who believed otherwise and/or those who understand the new reality but wished to keep the narrative elsewhere.Original Article

Previous Another Night Of Protests In Barcelona Over The Nine-Month Sentence Of Pablo Hasel
Next ‘Saturday Night Live’ Skit About Israel’s Vaccination Drive Condemned By Jewish Leaders, Groups, And Educators As Antisemitic