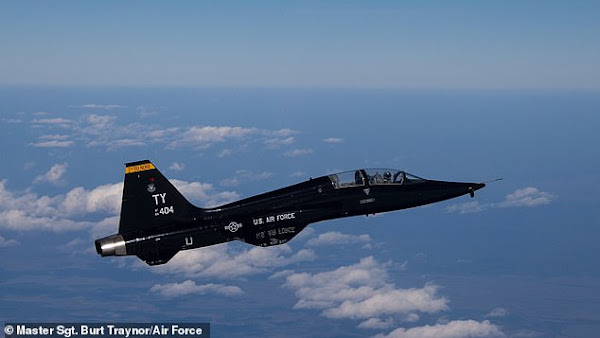 Pictured: A T-38 jet, the model being flown before crashing in Alabama on Friday
Daily Mail: Two people dead after military T-38 jet en route to Tallahassee crashed near Alabama airport
* The nature of the crash is not clear and the victims have not been identified * The presence of Air Force response suggests victims were Air Force personnel * This is the second deadly military plane crash in Alabama in recent months * Columbus, Mississippi was the origin point of the flight before its tragic end
Two people are dead after a military jet crashed near the Montgomery Regional Airport in Montgomery, Alabama on Friday.
Little is known of the victims at this point, although they are presumed to be members of the military, as both of the fatalities were on board according to CBS42.
The names of the victims have not been released at this time.
Read more ….
Update #1: Military jet crash kills 2 Air Force pilots (UPI) Update #2: USAF Instructor, Japanese Student Pilot Killed in T-38 Crash (Air Force Magazine)
WNU Editor: This is the second T-38 crash in two days …. USAF Suffers Two T-38 Accidents in Two Days. Non-Fatal Accident at Beale AFB, Two Killed in Columbus AFB Crash. (The Aviationist)Original Article