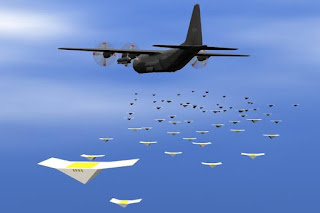 National Interest: Speed Racer: The U.S. Military's New Drone Swarm Weapon?
It is not clear what size, shape, or technical capacity the new “Speed Racer” may incorporate, yet all the military services are looking for new mini drones for swarming, stealthy drones for high-risk reconnaissance, and even armed attack drones to execute dangerous offensive missions.
The new Speed Racer is not likely to be a group of mini drones, but could easily fall within the scope of some of these other categories.
Lockheed officials have announced the existence of a new, high-tech “Speed Racer” drone set to enter ground testing in the coming months, but offered little to no details about the new platform.
Any specifics, including mission scope, weapons, sensors, or technical systems were not discussed or offered, likely for understandable security reasons, yet the existence and general plan for the new drone were announced last Fall, according to an interesting story from Aviation Week.
Read more ….
Update #1: Skunk Works Is About to Test a Secret New Aircraft Called 'Speed Racer' (Popular Mechanics)
Update #2: Is Lockheed Martin’s ‘Secret’ Unmanned Aircraft ‘Speed Racer’ Ready For Take-Off? (EurAsian Times)
WNU Editor: I have lost count in the past year on how many drone projects are being developed. The speed racer is another one.Original Article