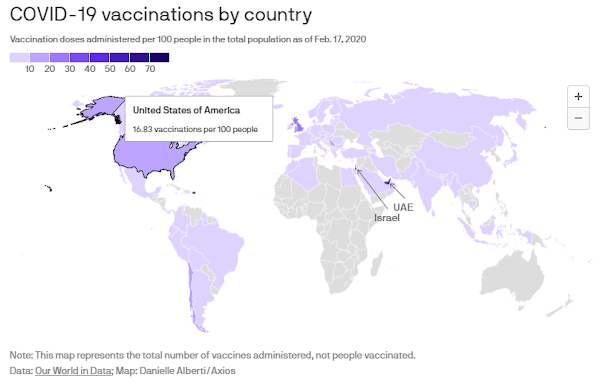 Axios: America's vaccine rollout has been among the best in the world
America’s much-maligned vaccine rollout is actually going relatively well, at least compared to other wealthy countries.
The big picture: The U.S. has carried out more vaccinations than any country in the world, and given a first dose to a higher percentage of its population (12%) than all but five countries: Israel, the Seychelles, the UAE, the U.K. and Bahrain.
In fact, the U.S. is distributing doses three times as quickly as the EU, adjusted for population, and nearly five times as quickly as Canada.
Read more ….
WNU Editor: Contrary to the White House's claims that there was no vaccine plan under the Trump administration …. Trump administration had no coronavirus vaccine distribution plan: White House (Reuters), 1.5 million Americans were being vaccinated every day when President Biden was inaugurated.
In comparison to much of the world, the U.S. vaccine rollout is definitely better than most countries (see here).
One more note. Need I remind everyone. With the exception of President Trump and a few others, almost everyone last year was predicting (myself included) that there would be no vaccines until the end of 2021 or 2022.Original Article

Previous With The Head Of The UN Nuclear Watchdog In Tehran, Iran Announces It Will Limit International Monitoring Of Its Nuclear Sites
Next NAVDEX 2021: Israel Shipyards unveils its fast Patrol Craft Shaldag MK V