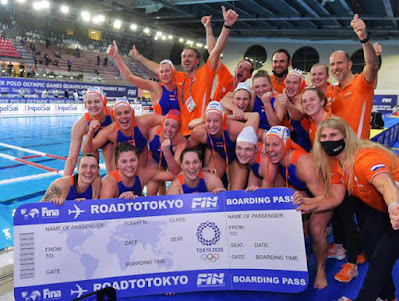 Hungary’s Head Coach Attila Biro admitted the difficulty of the match: “It was a really tough game for both teams. Our goalie was a little bit better than the Italian’s and I think we had huge mental power.”

“I knew that we couldn’t win by four-five-six goals obviously, that’s why we were winning by one or two goals. We tried to push in defence mostly. But, hopefully on attack we were much, much better than two days ago (5-8 loss to Greece).”

“Staying calm until the end of the game and take a high rhythm and push hard in defence was the key to win.”

For Hungary, it was the goal-scoring queen, Rita Keszthelyi, who once again reigned supreme with six goals, lifting her Trieste tally to an incredible 26.

The finals that were held on Sunday January 24 did not count for the Olympic Qualification.

The 10-team line-up for the Women's Water Polo tournament at Tokyo 2020 is now complete:

The USA, led by captain Maggie Steffens, is certainly ramping up the preparation for what could be their third consecutive Olympic title, after claiming victory in London 2012 and Rio 2016. In addition, the North American team has bagged most of the international titles of the highest competitions including the last three World Championships (Kazan 2015, Budapest 2017, Gwangju 2019) and the last three World Cups (2010, 2014 and 2018).

Hungary has missed the podium (4th place) at the last three Olympic Games, while the Netherlands is qualified for the first time since 2008 when they clinched the Olympic honours in Beijing (CHN).

Simone van de Kraats (NED) expressed her team’s joy: “We're so happy that we are finally at the Olympics. It’s amazing, this feeling."

The Trieste competition’s outcome came as truly encouraging in the lead-up to the Games after being held in a successful and safe "bubble". Players and coaches were strictly traveling from the hotel to the swimming pool and all matches were played behind closed doors, with no spectators.

Greece's Christina Tsoukala commented the much-awaited return to competition: "Returning? It's hard! But we all wanted to start again after almost a year without an international match, so it's good, we're happy."

EDGE, the advanced technology group for defence and beyond, today signed a contract with SAP, …