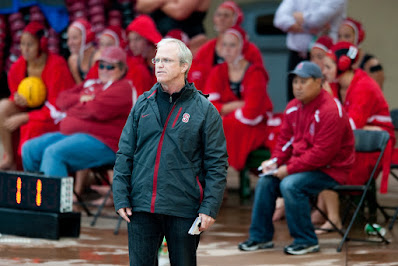 In its second year, the award aims to recognize and award the work of quality coaches and providers that are creating significant impact in their sport throughout the year.

"After a year spent video conferencing at my dining room table, away from the Stanford campus and Avery Stadium Pool deck, I was stunned to receive word that the USOPC had chosen me as their College Coach of the Year," said Tanner. "Paradoxically though I could not be more honored in that we are holistic and integrative in our approach, always focused on long term outcomes. Water polo is the world's toughest sport, the perfect vehicle for developing lifelong leaders for this past year's extraordinarily difficult environment and for future challenges we will face. I'm so grateful to be surrounded by our coaching staff, athletes current and former, Olympians past and aspiring, who make every day here a rocket ship ride. No one got to chase their ultimate 2020 competitive aspirations, but we learned and grew so much more in the wake of that disappointment and are grateful to have a renewed, distinct opportunity in 2021."

Tanner, in the midst of his 24th season at the helm the Cardinal, is a six-time ACWPC National Coach of the Year, and has guided Stanford to seven NCAA national championships in his time on The Farm.

Tanner has spent 23 seasons at the helm of the Stanford women's water polo program where he took on the developing program in 1998 and turned it into a nationally-ranked team that has won seven NCAA Championship titles and five Mountain Pacific Sports Federation Championship titles, and produced 12 Olympians and dozens of U.S. Senior National Team members. Stanford won the most recent NCAA Championship in 2019, and Tanner was subsequently inducted into the USA Water Polo Hall of Fame that same year.

"JT is an amazing coach," said Ann Friedlander, Ph.D, an Adjunct Professor of Human Biology at Stanford. "During my time engaging with the Stanford Women's Water Polo Team as a Faculty Fellow, I have been continually impressed with his holistic view of coaching and his ability to bring out the best in his athletes both in the pool and in their lives. Through rigorous practice, team events, interactions with Stanford faculty, TED Talks and bonding experiences, JT helps his players maximize their potential as athletes, teammates, good citizens, and future leaders. JT should also get extra praise for keeping a sense of team spirit, high moral and focused training (both in person and remotely) during these challenging times of COVID-19. His success in the pool is only one part of what makes him an exceptional coach and I have enjoyed watching him in action."

Last season, the Cardinal owned a 15-1 record with wins over 14 ranked opponents when COVID-19 halted all sports, forcing Tanner to find creative new ways to engage his athletes. Tanner adjusted the team's athlete-led TED talks to include professors who inspired and sparked interest in their presentation topic. The TED talks were created to cultivate a healthy environment and establish a platform for individuals to share their interests with the team. Additionally, he hosted LinkedIn and resume workshops to prepare athletes for their future and set them up for success after their time at Stanford. His commitment extends outside of competitions in supporting athletes Sarah Klass and Lauren Indart, who launched Swim4Diversity, an organization dedicated to raising funds for racial justice causes.

"JT continually invests deeply and thoughtfully in enabling each of his players to grow to their full potential as competitors, students and global citizens," said Gary L. Darmstadt, MD, MS, an Associate Dean for Maternal and Child Health, and Professor of Neonatal and Developmental Pediatrics at the Stanford University School of Medicine. "I am highly honored to participate alongside JT as Faculty Athletic Fellow for the team in annual player-student TED talks, faculty appreciation banquets, and mentoring many team members in career development in the health sciences. It's a great joy and inspiration to watch JT in action!"