There is no time to lose

Carbon dioxide levels continue at record levels, despite COVID-19 lockdown, the WMO reports. The increase in carbon dioxide from 2018 to 2019 was larger than that observed from 2017 to 2018 and larger than the average annual growth rate over the last decade.

The rise has continued in 2020. The lockdown did cut emissions of many pollutants and greenhouse gases, but any impact on carbon dioxide levels – the result of cumulative past and current emissions – is in fact no bigger than the normal year to year fluctuations.
“Carbon dioxide remains in the atmosphere for centuries and in the ocean for even longer. The last time the Earth experienced a comparable concentration of CO₂ was 3-5 million years ago, when the temperature was 2-3°C warmer and sea level was 10-20 meters higher than now. But there weren’t 7.7 billion inhabitants,” said WMO Secretary-General Professor Petteri Taalas.
“The COVID-19 pandemic is not a solution for climate change. However, it does provide us with a platform for more sustained and ambitious climate action to reduce emissions to net zero through a complete transformation of our industrial, energy and transport systems. The needed changes are economically affordable and technically possible and would affect our everyday life only marginally. It is to be welcomed that a growing number of countries and companies have committed themselves to carbon neutrality,” he said. “There is no time to lose.” 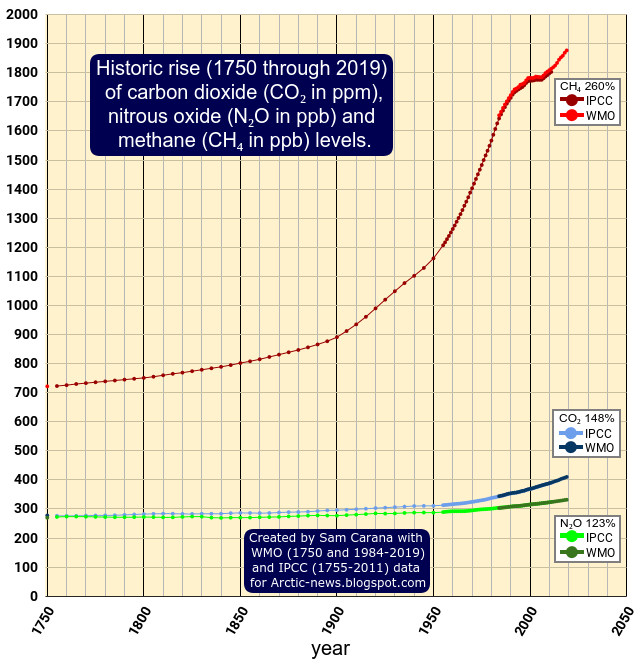 Above image illustrates the steep rise in methane, compared to carbon dioxide and nitrous oxide. Levels of carbon dioxide, methane and nitrous oxide reached new highs in 2019, reports the WMO. Carbon dioxide (CO₂) rose to 410.5 ppm (148% of its pre-industrial level), methane (CH₄) to 1877 ppb (260% of pre-industrial) and nitrous oxide (N₂O) to 332.0 ppb (123% of pre-industrial).
So, given that there's no time to lose, why mention carbon neutrality, and not 100% clean, renewable energy? Also, let's not lose sight of other emissions such as N₂O. Yes, dramatic cuts in CO₂ emissions do need to happen rapidly, and yes, this does require a complete transformation of industry, energy and transport. Nonetheless, N₂O emissions are also important and most N₂O emissions result from land use, such as food production and waste handling, which must also change.

The IPCC (AR5) gave N₂O a lifetime of 121 years and a 100-year global warming potential (GWP) of 265 times that of carbon dioxide. Furthermore, N₂O also causes stratospheric ozone depletion.
The IPCC, in special report Climate Change and Land, found that agriculture, forestry and other land use activities accounted for some 13% of CO₂, 44% of CH₄, and 82% of N₂O emissions from human activities globally during 2007-2016, representing 23% of total net anthropogenic emissions of greenhouse gases.
If emissions associated with pre- and post-production activities in the global food system are included, the emissions could be another 14% higher, i.e. as high as 37% of total net anthropogenic greenhouse gas emissions, the IPCC added.
Let's get back to that 23%. The IPCC calculates this 23% by using a GWP of 28 for CH₄. Over the first few years, however, the GWP of CH₄ is more than 150, as discussed in an earlier post. When using a GWP of 150, land use emissions rise from 23% to 31%, as the image on the right shows. Add another 14% from further food-related emissions and the total share for land use becomes 45% of people's emissions.
In other words, all polluting emissions need to be reduced. Moreover, a recent paper by Jorgen Randers et al. points out that, even if all greenhouse gas emissions by people would stop immediately, and even if CO₂ levels in the atmosphere would revert back to pre-industrial levels, overall temperatures would still keep rising for centuries to come. Another recent paper, by Tapio Schneider et al., points out that solar geoengineering may not prevent strong warming from direct effects of CO2 on stratocumulus cloud cover.
This means that the threat is even more menacing when including large methane releases that threaten to occur as temperatures keep rising in the Arctic and sediments at the seafloor of the Arctic Ocean threaten to get destabilized, resulting in the eruption of huge amounts of methane.
What is the joint impact of carbon dioxide and methane? The WMO reported CO₂ levels of 410.5 ppm and CH₄ levels of 1877 ppb in 2019. As discussed in an earlier post, over the first few years after release, methane's GWP is more than 150 times higher than carbon dioxide. Accordingly, the 2019 level of 1877 ppb of methane translates into global heating of 281.55 ppm CO₂e. Together, that makes 692.5 ppm CO₂e, which is 507.5 ppm CO₂e away from the 1200 ppm CO₂e cloud tipping point.
The image below illustrates that the joint impact of carbon dioxide and methane could cause the 1200 ppm CO₂e tipping point to be crossed in 2040. The image uses IPCC and WMO through 2019 to display three lines, with added trends: – Black line: CO₂ in parts per million (ppm);
– Red line: CH₄ in ppm CO₂e, using a GWP of 150;
– Purple line: CO₂ and CH₄ in ppm CO₂e.

Trends for CH₄ are selected to reflect a steep rise as a result of methane hydrate destabilization. 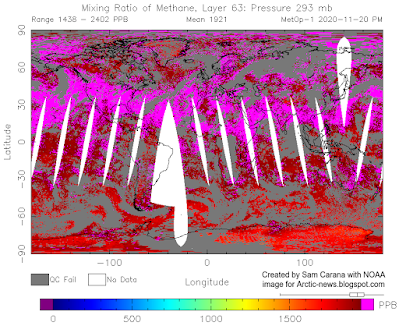 How could such a steep rise in methane levels occur?
Stronger methane releases from subsea permafrost can be expected, says a paper by Natalia Shakhova et al. A 1000-fold methane increase could occur, resulting in a rise of as much as 6°C within 80 years, with more to follow after that, according to a paper by Atsushi Obata et al.
Seafloor methane releases could be triggered by strong winds causing an influx of warm, salty water into the Arctic ocean (see this earlier post and this page). 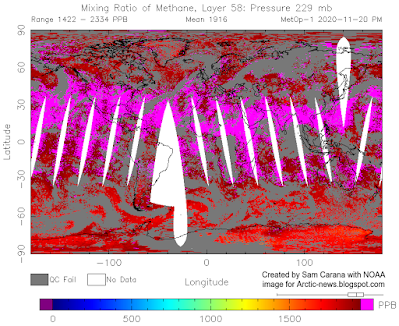 Since little hydroxyl is present in the atmosphere over the Arctic, it is much harder for this methane to get broken down.
Even relatively small methane releases could cause tremendous heating, if they reach the stratosphere.
Methane rises from the Arctic Ocean concentrated in plumes, pushing away the aerosols and gases that slow down the rise of methane elsewhere, which enables methane erupting from the Arctic Ocean to rise straight up fast and reach the stratosphere. The IPCC (AR5) gave methane a lifetime of 12.4 years. The IPCC (TAR) gave stratospheric methane a lifetime of 120 years, adding that less than 7% of methane did reach the stratosphere at the time.
The images on the right illustrate this. On November 20 pm, 2020, the MetOp-1 satellite recorded high methane levels over the Arctic Ocean at 293 mb (top image on the right). This corresponds with an altitude of some 9 km altitude, which is where the Stratosphere starts at the North Pole. The global mean methane level at that altitude was 1921 ppb. 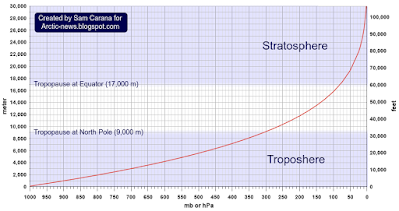 The next images show areas with high levels of methane, as indicated by the magenta color, remaining present over the Arctic Ocean even at higher altitudes.
The higher the altitude, the more methane will concentrate over the Equator. Yet at 229 mb, high methane levels are still visible north of Siberia, while global mean methane levels were still very high, i.e. 1916 ppb.

Even at 156 mb, there still are high methane levels visible (green circle, third image right).
The conversion table shows that the Tropopause, which separates the Troposphere from the Stratosphere, is lower over the North Pole (at about 9 km altitude) than over the Equator (17 km altitude). 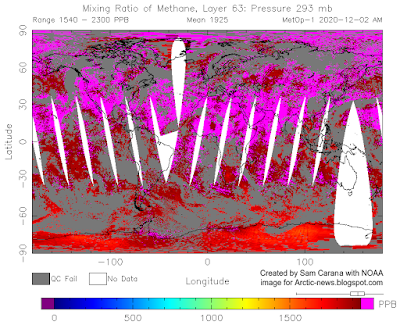 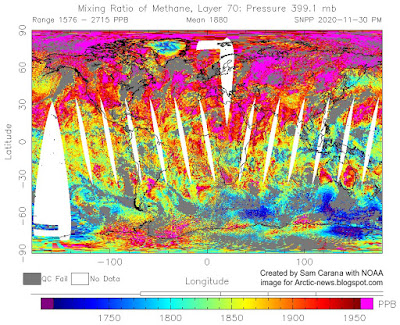 In conclusion, a huge temperature rise could occur soon, even with a relatively small increase in carbon dioxide and methane releases.
As above image illustrates, a temperature rise of more than as 10°C could eventuate as soon as 2026 when taking into account aerosol changes, albedo changes, water vapor, nitrous oxide, etc., as an earlier analysis shows.
The joint impact of these warming elements threatens the cloud tipping point to be crossed and the resulting 8°C rise would then come on top of the 10°C rise, resulting in a total rise of 18°C, as illustrated by the image on the right, from an earlier post.
Indeed, there is no time to lose. It is high time to stop the denial of the size of the threats and challenges that the world faces, the harm inflicted and the speed at which developments could strike.
The situation is dire and calls for immediate, comprehensive and effective action, as described in the Climate Plan.
Links
• Climate Plan
https://arctic-news.blogspot.com/p/climateplan.html
• When will we die?
https://arctic-news.blogspot.com/2019/06/when-will-we-die.html
• IPCC AR5 Workgroup 1
https://www.ipcc.ch/assessment-report/ar5/andhttps://www.ipcc.ch/site/assets/uploads/2018/02/WG1AR5_Chapter08_FINAL.pdf
• IPCC Report Climate Change and Land
https://arctic-news.blogspot.com/2019/08/ipcc-report-climate-change-and-land.html
• WMO Greenhouse GasBulletin
https://public.wmo.int/en/resources/library/wmo-greenhouse-gas-bulletin
• WMO news release: Carbon dioxide levels continue at record levels, despite COVID-19 lockdown
https://public.wmo.int/en/media/press-release/carbon-dioxide-levels-continue-record-levels-despite-covid-19-lockdown
• Understanding the Permafrost–Hydrate System and Associated Methane Releases in the East Siberian Arctic Shelf, by Natalia Shakhova, Igor Semiletov and Evgeny Chuvilin (2019)
https://www.mdpi.com/2076-3263/9/6/251
• Damage of Land Biosphere due to Intense Warming by 1000-Fold Rapid Increase in Atmospheric Methane: Estimation with a Climate–Carbon Cycle Model – by Atsushi Obata et al. (2012) https://journals.ametsoc.org/doi/full/10.1175/JCLI-D-11-00533.1
• Possible climate transitions from breakup of stratocumulus decks under greenhouse warming, by Tapio Schneider et al. (2019)
https://www.nature.com/articles/s41561-019-0310-1
• Solar geoengineering may not prevent strong warming from direct effects of CO2 on stratocumulus cloud cover – by Tapio Schneider et al. https://www.pnas.org/content/early/2020/11/10/2003730117
• An earth system model shows self-sustained melting of permafrost even if all man-made GHG emissions stop in 2020 – by Jorgen Randers et al.
https://www.nature.com/articles/s41598-020-75481-z
• Most Important Message Ever
https://arctic-news.blogspot.com/2019/07/most-important-message-ever.html
• A Temperature Rise Of 18 Degrees Celsiushttps://arctic-news.blogspot.com/p/a-temperature-rise-of-18-degrees-celsius.html
• Cold freshwater lid on North Atlantic
https://arctic-news.blogspot.com/p/cold-freshwater-lid-on-north-atlantic.html
• A rise of 18°C or 32.4°F by 2026?https://arctic-news.blogspot.com/2019/02/a-rise-of-18c-or-324f-by-2026.html
• Temperatures threaten to become unbearablehttps://arctic-news.blogspot.com/2020/09/temperatures-threaten-to-become-unbearable.html
• Warning of mass extinction of species, including humans, within one decade
https://arctic-news.blogspot.com/2017/02/warning-of-mass-extinction-of-species-including-humans-within-one-decade.html
Original Article