GM: We are delighted to have the inimitable Sam Carana on today’s show. We submitted written questions to Carana and went back-and-forth a couple times to pursue follow-up questions. Our frequent guest, Pauline Schneider, will be supplying the voice of Dr. Carana. You can find Carana’s blog at Arctic hyphen news dot blogspot dot com. Dr. Carana posts anonymously about abrupt, irreversible climate change. To preserve her anonymity, we will refer to her as female, Sam, and Dr. Carana. A caveat is in order: In doing so, we are acknowledging our respect for Carana’s work, and we are not indicating Carana’s credentials or gender. Dr. Carana, welcome to Nature Bats Last on the Progressive Radio Network.

1. GM: How long have you been disseminating information about abrupt climate change to the public under the Sam Carana moniker?

1. SC: I've been worried about abrupt global warming for a long time and as time went by, I only became more worried about it. I was stunned to see that, when Hurricane Katrina hit the U.S. in 2005, little action followed on climate change.
If I had to pick a year when I became particularly active on abrupt climate change, it would be 2007. I wrote a post in early 2007 with the title ‘ten dangers of global warming’. I mentioned tipping points and the possibility that global warming could drive humans into extinction, in particular as more animals and plants that humans depend on would disappear.
In 2007, I also wrote ‘Ten recommendations to deal with global warming’. I started more blogs and groups that year, partly as an inventory and partly as a way to encourage discussion. In 2007, I also started to recommend local feebates as the best way to make a difference.
In September 2007, I was shocked to see Arctic sea ice fall to a record low. At that time, I was also looking at how much methane there is in the Arctic Ocean. In those days, few people were worried about loss of Arctic sea ice, let alone that they were worried about eruptions of methane from the seafloor of the Arctic Ocean or that they were making links between the two.

GM: And I should point out that that 2007 datepoint, at the time the lowest ice cover recorded, was the last datapoint Maslowski and colleagues used in their 2012 paper in Annual Review of Earth and Planetary Sciences, and they used a linear projection, based on that information of relatively few datapoints, so that that 2007 point dragged the rest down and lead to an incorrect, too-soon projection of 2016 (± 3 years) for an ice-free Arctic. But I don't think they missed it by too much, btw.

2. GM: Why do you do provide this information anyway?
2. SC: How could I not want to share this? It's the most important issue we're all facing and it’s getting very little attention, which makes it self-obvious for me to present the information in the way I do, quickly, concisely, and with links that point at sources, and without diversions and without distractions.
That’s also why I share information on a free blog, without asking fees and without advertising. If you care about the message, then you want people to hear about it, so you don’t need to get paid to share the message, and you want to reach people without hurdles or diversions.
This is something that affects everyone, so the reasons to share it are contained in the message. I feel compelled to share what worries me, after all, it’s the most important message ever posted and there is so much urgency to act on the unfolding catastrophe which could soon leave us no time or room to act at all.

3. GM: OK, fair enough, but why do you provide this information anonymously?
3. SC: If anonymous means that no author name is added, then I am doing the opposite. I actually do like to add the name Sam Carana when I create content, and I also like to add links to sources. That makes it easy to find things back, to see in what context they were used, etc.
But I understand what you mean, I don’t like to add further details, because I want people to focus on the message, rather than on the person who happens to be carrying the message. Adding personal details can result in diversions that can in turn delay the necessary action.
Also, I do welcome discussion. When I post on facebook, people can easily comment and make suggestions, and this can lead to changes in the content that can be made quickly, often instantly. Communication can be quick and direct, I mean it’s easy to take part in discussions on facebook, there’s no need to go through bureaucratic processes or to be wealthy or to be part of an elite or a privileged group, so that makes it more democratic.
4. GM: Before we recorded this interview, a coupe or three weeks ago, we put out a request to the Nature Bats Last group on facebook, and Joey Casey submtted this question from that group:
4. Joey Casey (from the Nature Bats Last group at facebook): Will oceans evaporate? What sort of state do you see Earth becoming in the long term?
4. SC: That's the threat if things keep going as they are now, Earth will become similar to Venus. See the image below, from an earlier post.

GM: Well,that's kind of a bummer.
5. GM: You rarely submit to interviews. Why did you agree to join us in this on-air conversation?
5. PS: Just a note, these questions were sent to Sam previously, this is Pauline speaking now, now I'm reverting back to Sam.
5. SC: Just like you, I like to look at the bigger picture. Our conclusions are based on scientific findings and we clearly reference those findings and add links to original sources. And we both have to conclude that there are huge threats; threats of such a magnitude, severity and imminence that they make me think: "This should be frontpage news every day!"
Yet, what happens is this: Events are downplayed in the media or they get little or no attention at all. This has now been going on for well over a decade, even as the problems are escalating before our very own eyes. We're all demanding honesty on issues of this importance.
So, it feels good to be among people who do see the importance of such issues and events, and who are familiar enough with them, as well as with my posts, to seriously discuss things and comment on my work, so I have been looking forward to this conversation.

6. KH: Now we'll start with some of my questions I had to Sam.
6. KH: Have you noticed any evidence of climate-change research data being tampered with?
6. SC: Not so much tampering with data, but what I see a lot is misrepresentation of the data, downplaying of the implications or simply ignoring things altogether. Most people will never look into the data, many only read headlines of news reports, or not even that.
Politicians have also blocked a lot of research that could have provided precious data that we now lack. This has contributed to the dire situation we’re in now, and there still are few data on, say, methane releases in the Arctic. What is also lacking is research into possible action to improve the situation. I have long suggested that politicians who inadequately act on the unfolding climate catastrophe should be brought before the International Criminal Court in The Hague, the Netherlands.

7. KH: As we watch the collapse of the Arctic Sea Ice and the meandering jet streams how concerned are you about further disruption to the Atlantic Meridional Overturning Circulation (AMOC)?

7. SC: One of the biggest dangers I see is that a cool freshwater lid is growing on top of the surface of the North atlantic, near the Arctic Ocean, and that this is sealing off hot water underneath the sea surface from the atmosphere.
Slowing down of AMOC will result in an increasing amount of hot water accumulating underneath the surface.
As storms grow stronger, chances increase that a sudden inflow of hot salty water will enter the Arctic Ocean and reach sediments at the seafloor that contain huge amounts of methane.
8. KH: Recently there has been a concerted attack on the seminal work of Professor Peter Wadhams, especially on the subject of the ‘Methane Bomb Hypothesis’, do you have any doubt that it is a real threat?
8. SC: Politicians and news media are often ignoring the temperature rise, or downplaying the dangers. Instead, the precautionary principle should be applied, and this should be applied on three dimensions to issues such as methane eruptions from the seafloor of the Arctic Ocean.
The first dimension is a matter of magnitude and severity. A vast amount of methane is held in sediments. If just a tiny part of this methane will erupt, this could wipe out humanity, if not make all life on Earth go extinct, due to the huge immediate global warming potential of methane, and due to the numerous feedbacks.
The second dimension is probability. Methane hydrates destabilize as temperature rises. So, as temperatures continue to rise, the likelihood grows that such eruptions of methane will occur.
The third dimension is imminence. The longer we wait, the more urgent the threat becomes, as the temperature rise doesn't wait for us. 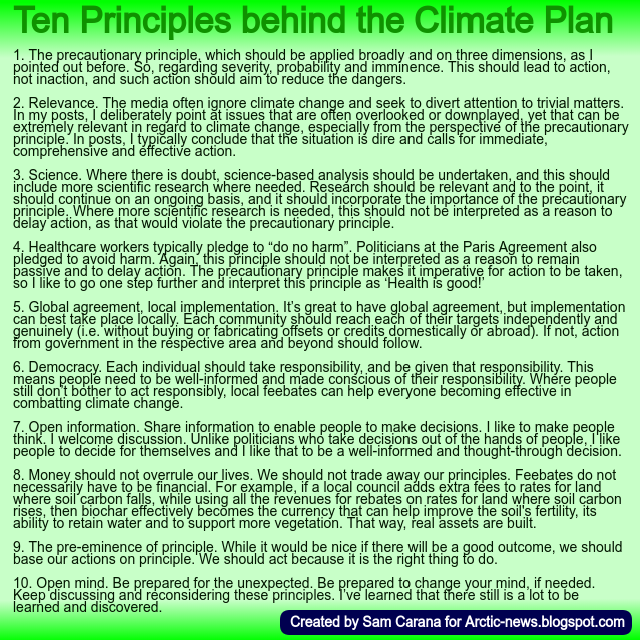 The Precautionary Principle illustrated by the image below.

Snowstorms, the breach of the Arctic vortex and the effects of ice meltwater on the oceans