NATO May Increase Troops In Iraq To As Many As 5,000 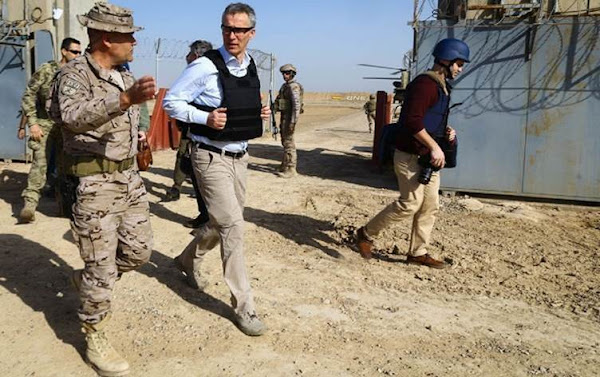 NATO Secretary General Jens Stoltenberg visited the Besmaya Range Complex in Iraq on March 2018. File photo: Spc. Antonio Lewis/ US Army
Reuters: NATO to agree larger Iraq training force as violence rises
BRUSSELS (Reuters) – NATO defence ministers are set to expand the military alliance’s training mission in Iraq once the coronavirus pandemic eases, senior officials and diplomats said, potentially cementing a broader role for the Atlantic alliance in the Middle East.
Ministers are set to agree plans on Thursday during a video conference, potentially taking the mission from its current maximum of some 500 troops to around 4,000 or 5,000, four diplomats said.
NATO Secretary-General Jens Stoltenberg said on Monday he expected defence ministers to agree to an expanded mission, with more allied personnel working in more security institutions across Iraq. “The mission will expand gradually, in response to the situation,” he said.
Read more ….
Update: NATO may increase troops in Iraq to as many as 5,000: diplomats (RUDAW)
WNU Editor: This is what I call "mission creep".Original Article

Fenella McGerty, IISS: Global defence-spending on the up, despite economic crunch Notwithstanding the coronavirus pandemic …