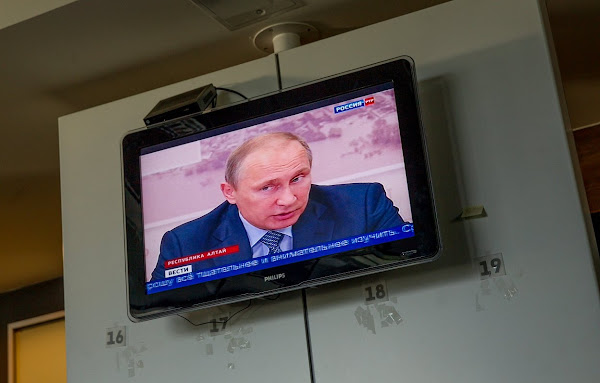 Krievijas televīzijas kanāls "Rossija RTR". Photo: Scanpix, Raul Mee
Public Braodcasting Of Latvia: Latvia's broadcast regulator bans Russian channel for a year
Latvia's broadcast regulator, the National Electronic Mass Media Council (NEPLP) has announced that it is banning the retransmission and distribution of the Russian “Rossija RTR” channel in the territory of Latvia for a full year.
The decision was made because four significant violations of the law were identified, related to incitement to hatred, incitement to violence and provocation of military conflict, the NEPLP said in a statement.
The ban on retransmission of Rossija RTR in the territory of Latvia will come into force on February 15 this year, giving cable operators a week to withdraw the channel from their broadcast packages.
Read more ….
WNU Editor: This ban is expanding and will be backed with stiff fines …. Latvia goes further than a simple ban on Russian TV news – Riga will FINE citizens for watching ‘illegal’ cross border channels (RT). More here …. Latvia’s ban on 16 Russian TV channels an 'air cleanup,' Journalist Union says (TASS). I also expect Latvia will be moving to ban streaming and other internet services.
I personally do not think this is going to work. Almost a third of the population in Latvia are Russian, and they are not going to give up on their language nor on their access to Russian programming.
Update: Latvia is not the only country banning Russian TV …. Ukraine strikes back against Russian infowar with ban on Kremlin-linked TV channels (Atlantic Council).Original Article