With all due respect to Korean baseball and the Bundesliga, sports in short supply led my parents to channel their love for competition elsewhere. I'm not sure why it took a pandemic for them to latch on to Jeopardy, but like so many Americans, they did and they love it (notice the present tense). Because I have been in their bubble since the beginning of COVID, I joined their bandwagon, this bandwagon. And our love for the late Alex Trebeck is what is driving #15 on my 20 for 2020.
Category: Leaders of the Pac(k).
Clue: Aaron Rodgers.
Answer: Who is a future host of Jeopardy and the 2020-2021 NFC MVP? 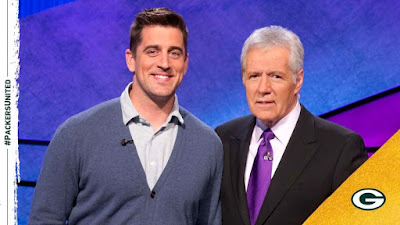 On Saturday evening, I joined in my parents' now nightly routine and watched what was Trebeck's final episode of Jeopardy (recorded months prior). The Canadian-born American, who hosted the show for 36 years died of pancreatic cancer at his home November 8, 2020. He was 80.
News of Trebek's death sent celebrities and fans around the country to social media to express their grief—including an athlete who led his team to the NFC Championship game, #12 for the Green Bay Packers: Aaron Rodgers. 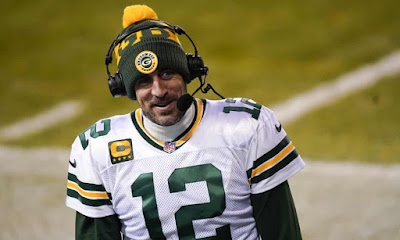 As many football fans already know, Rodgers was a contestant on Celebrity Jeopardy in 2015—and a winning one at that! As written in Packers' Aaron Rodgers to guest host Jeopardy!, the All-Pro QB said, "the show has been so special to me over the years. It’s been a staple at my house here in Green Bay for the last 16 years 6 o’clock, watching Alex and trying to get as many questions as I can. When the opportunity came up in 2015, that was a dream come true. It really was. To be on there, to get to meet Alex was just such a special moment. We’re all obviously sad about his passing.”
Football fans will have to wait until the day before Super Bowl LV to find out if Rodgers will be honored as the NFC MVP for the third time. And, they will also have to wait to find when and if he will host "What is America's most popular game show?"
As written in The Guardian,

Rodgers first made the announcement earlier on Tuesday during an appearance on Sirius XM’s The Pat McAfee Show. A representative from Jeopardy! declined comment and said no announcement has been made about future guest hosts.

“I may have jumped the gun a little bit, so I apologize to Jeopardy! if they wanted to announce it,” Rodgers said. “I just got so excited on the show earlier. It kind of just went down the last couple of days, us figuring it out. It is very exciting. It’s for the offseason. We’ll be even more excited when that opportunity gets a little closer.”

“We all have so much love and affection I think for what [Trebek’s] meant to just that half hour, that 22 minutes of our lives on a daily basis for those of us who are big fans of the show,” Rodgers said. “To be able to be a guest host is really, really special for me. I can’t wait for the opportunity.” 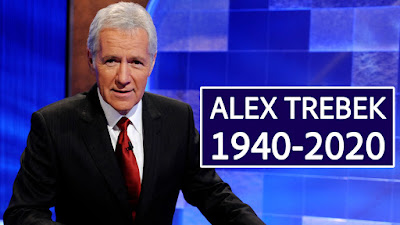 The show is currently using a series of interim hosts to replace Alex Trebek, all the while knowing that no one can nor will replace who Jesuit Father Joseph McShane called "a brilliant man who is the nation's schoolteacher." According to America magazine, McShane said, "He teaches us about how to live each day with purpose, with focus, with determination, with love, and without being obsessed with oneself."
Reading about Trebek in this light illuminated just how much he shares in common with professional athletes. They too live each day with purpose, focus, and determination. If only more of them could become less obsessed with themselves and look at the gifts, talents and knowledge of others….even if it is trivial. That's what love is and love does.
So grateful—during these hard times—for shows like Jeopardy who help us yell, laugh, and say Wow…Clues: Merci Alex Trebek! and Allez Aaron!
Answer: Who are respective MVPs in their line of work.
Photo Credits
Alex and Aaron
Rogers
Remembering TrebekOriginal Article